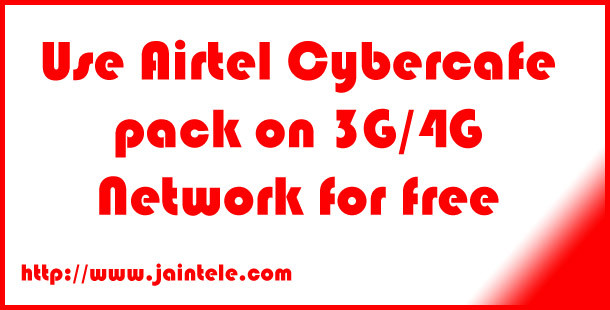 Now a days, the broadband Internet is not that costly. We can get unlimited Internet plans with Wi-Fi at home, through broadband connections. But still, mobile data is required in the phone as we cannot be at home all the time. Sometimes we need fast Mobile Internet for some specific need, and we don’t want to spend much on that. Different companies provides different small data plans, but those are not sufficient or there will be no speed at all, say for 2G.

Airtel recently launched a small pack called Cybercafe plan worth Rs.5. In this plan, you get 1 hour full unlimited Internet on 2G network. There are also small 3G/4G plans, but as 3G/4G speed is very high, the pack data will not long last 😛

Note: Currently Airtel’s 3G and 4G plans are same. You will get speed according to the network you are receiving on your mobile.If you are in 3G network, you will get 3G speed, and if you are in 4G network coverage, you will get 4G speed.Well, in this article, I am going to share a trick, through which you can use the Airtel’s 1 hour 2G Cybercafe pack on 3G/4G speed. Just follow the instructions carefully and you are good to go 🙂 :
Please note that this is a trick tried by many people in different regions. Try at your own risk. We are not responsible for any talktime/data loss or SIM blockage in case the trick doesn’t work for you.

Steps to use Airtel’s Cybercafe pack for one hour on 3G/4G network:

If you are facing any issue in performing the steps above, feel free to put comments. We’ll be happy to help you as soon as possible. Also, comment whether this trick is working for you or not, with your area/state name. It will be useful for other people as well.

I have written this post to explain how to unlock Samsung mobile phone without any box and cable. Sometime we get Samsung mobile with phone lock. If you are an end user or a mobile repair professional, it will help you. This trick will work specially on the touch screen phone like Samsung Champ, Champ…

Hello friends, Many Kind of USB Modems are available in market. They are very good to use, but are locked to their operators. i.e. They are branded so that we cannot use other simcards in that modems.Obviously we can make them debrand and use other simcards , but it costs us very much.In almost all…