This article has been updated after the recent introduction of a new feature called “Delete for Everyone” on Whatsapp. Earlier we compiled some workarounds to delete a sent message on Whatsapp, which was not actually deleting the message. But thanks to WhatsApp’s this new feature which really deletes a send message. You can read further for more details on how to use this new feature.

It has been a few days since WhatsApp has rolled out the new feature called Delete for Everyone, and truly this feature may be a life savior sometimes. Yes, now you can actually delete a sent message on WhatsApp.

But, you can do so within 7 minutes of sending the message.

Seems less. No, 7 minutes are enough if you have realized your mistake 🙂

Well, no further discussion on this. Let’s see how to delete a sent message.

Well, WhatsApp already had the feature of deleting a sent message, but that was limited to just your own. You couldn’t delete the message from the receiver’s phone. But now you can. Just long tap a sent message on any chat. You will see the following three options as per the screenshot below: 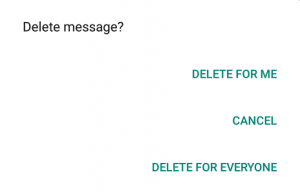 You will get the Delete for Everyone option only up to 7 minutes of sending the message. After that, you can delete the message only from your phone.

The rest of the article explains the workarounds we shared earlier, to delete a sent message on WhatsApp.

Ever landed into any situation where you felt the need of deleting a WhatsApp message you just sent to someone? Many times, no? Well, we cannot really delete a WhatsApp sent message, which is sent to the server. But we have some workarounds which can help you come out from the worst situation. Read the article, and there you go.

How much do we need the delete/edit option

Should I have sent this?
No matter how serious or dumb our conversations on WhatsApp, there is a point where you stop there and look at the text sent, and you go like “What on the Earth made me sent this?”, I sometimes do this when there is a typo, it gets me nuts. Obviously, there is a reason why all other platforms like Facebook and Instagram have got this option. It’s ridiculous the fact that you can get stuck with some virtual statements for the rest of your life on your personal page.

Well, Twitter still can’t do it
Twitter hasn’t added the editing feature yet, so you can get a 1000 re-tweets for a tweet with a typo. Thanks, geniuses. So, yeah! We definitely need that feature. Oh man, if we had the power to have it in real life. How come we still don’t have it for our virtual lives?

How my friend got fired because of WhatsApp

I know someone who would have found this option helpful, he’s fired now. We had a WhatsApp group for our company team that included our managers and even the directors… I have no idea what idiot thought that would be useful… so one day, a manager texted everyone on this group that there would be a small business review for the entire team later that week. If you have figured it out by now, this same team has got their own private “non-managerial level WhatsApp group” so they can get at the managers. One thing led to the other, this unfortunate guy just sent a filthy voice message shaming the company’s policies and leaders, to the very wrong WhatsApp group that included the managers themselves. Later on, it was listened by the entire group, no matter how many “sorry voice messages” were sent, apologies, or whatever can get him out of this, he was fired the very next day.

The delete/edit feature is there already, however…

Funny thing. You can technically stop a text from being sent to the receiver. Now, imagine yourself texting your girlfriend a very hot text, and in a frame of a second, you texted it to your mom! You have a few seconds to stop your text, with the help of Mr. Luck.

Here’s how you do it?

You’ll find a small clock beside your text, that’s Mr. Luck’s part, now your part, you quickly disconnect your phone from wifi/LTE so you make sure the text doesn’t get sent to the Whatsapp server. If your text shows one tick that means that it reached the Whatsapp server and the receiver will get your text once they are online or open their WhatsApp. So now, without any internet connection and with a clock showing by your text, you are safe! Now click on the hot text and delete it, reconnect and you’re safe and sound.

Read also: 20 Best Google Gravity Tricks Which Will Amaze You

How to crash your friend’s Whatsapp?

I went on Quora and asked how did people manage to stop their WhatsApp receivers from seeing an embarrassing text. I tried once to send any letter so many times till the thread is so long the reader will not bother scrolling up, however that just made things worse since it was a clear sign I was trying to hide something. So a dear internet friend on Quora suggested a ‘Whatsapp hack”. It said that if you sent a 2000 word text to someone on Whatsapp it crashes the receiver’s app and he has to reinstall it to open up his messages again or delete your thread. Well, that’s a little bit evil however still worth destroying any evidence for any mischievous texts.

Will Whatsapp do it?

WHATSAPP is planning a new update that will let app users recall or revoke sent text messages, as well as edit texts after they have been sent.
It has launched now the beta version for trial, you can recall or revoke your texts. Well, too late is better than never.

As an iPhone user, I stopped using Whatsapp for a while and reverted to iMessage. Man, that thing is much cooler than WhatsApp, with the emojis and the handwritten texts, videos, apps being sent, Apple Music tracks. It’s also very smooth AND you can stop a message from being sent to the recipient….

But still iMessage is no better than Whatsapp, here’s another WhatsApp hack
By quickly swiping up the control center and enabling the Airplane mode. But since WhatsApp was there way longer than iMessage I had to get back on WhatsApp to communicate with non-iPhone users. Was still fun though. Yeah, I definitely need a revoke/edit button on my texting apps, it will make lots of people happy and probably would have helped me last week when I sent my business partner an extremely angry text. Luckily, he was tolerant enough to just block me off WhatsApp.